So I have a lot of catching up to do. But here’s a quick look at some of the Progress that I’ve made. I haven’t written in a while, but there is no good reason why other than I have had other stuff on my mind. One of my challenges is to remain consistent with this blog, and consistent for me is every once in a while taking an unexplainable hiatus from the blog.

But not from the car.

I’ve been working pretty hard on the car. My main goal was to get the car started. This was a seed planted by my friend Chris, and it started with me rebuilding the carburetor. 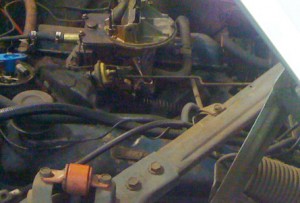 Carb was pretty lacquered up with varnish

I was a little nervous about this until I actually started to do it. I am putting together a separate page for the blog that details the rebuild – an idea I had when I started a blog entry that was a step-by-step, blow-by-blow account of how I rebuilt the carb.

In short, first I removed the carb. The carburetor was stained with old gas – giving it the bronze patina indicative of its age and illustrative of the time it has sat, idle in the garage. I actually thought for a moment that the carb was supposed to be that color.

I brought the carb home to my place and took a couple of weekends to rebuild it. I got a carburetor rebuild kit from CJ Pony Parts (which I see has been reduced in price since I purchased it, goddammit!), I found myself a Gunk brand carburetor dip, disassembled the carb, soaked the parts for days in the dip.

I reassembled the carb, and said my prayers. I brought it back to the car with a plan – but first I needed to get rid of the old gas in the car. That took some doin – but ultimately, I was able to drain the gas tank (they actually have drainplugs – as I recall, GMs don’t). Two trips to my ex-brother-in-law’s used car lot with the stinky, varnish-like gas and the deed was done.

My goal, again, was to get the car started – and after some challenges dealing with getting a fuel filter for the carb, I hooked her up, got the firing order from one of the old books that my cousin had with the car, dropped a fuel line from the fuel pump into a gas can with a gallon of fresh gas.

And then? Well, see for yourself.

What’s the next step? Well, I wanted to drive the car, of course. I didn’t. Actually, I couldn’t. No valve covers, so it would have blown oil out everywhere. No brakes, so I would not have been able to stop. No gas in the actual gas tank, so I would not have gotten far anyway. Just hearing the engine run was going to have to be enough, and you know what? It was.

Next, I spent the rest of yesterday and today prepping the engine for removal. Have a look before: 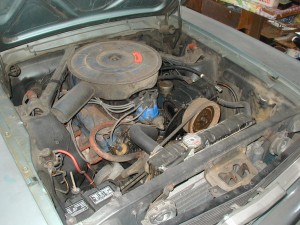 Back Before It All 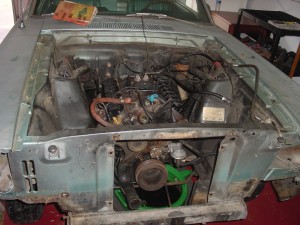 And Now After - Almost Ready for Extraction

3 thoughts on “Catching Up”