It’s funny how time just rolls on. Sometimes slower than is bearable, but most times these days time passes so fast I can hardly keep up with what is going on. I spent a great deal of time a few weekends before my trip with my young Niece and Nephews. Watching thier insane play reminded me how much I wanted the time to pass sometimes.

Wow - this one brings back memories.

Time was the enemy – especially at school. I was a clock watcher. I would watch the clock, try to pass the time by replaying the previous night’s Happy Days episode in my mind, by pretending to read a text book, or by passing the time with daydreams. My teacher would get pissed and scold me when she caught me watching the clock, so I became a pro at being discreet about it, and the scoldings stopped – or maybe the teacher just gave up?

Regardless, as I sneaked glances at the black-rimmed, white-faced clock I often swore that the red second hand was standing still – or worse, moving backwards. To this day I am certain it did. The daydreams never seemed to drown out the white noise of teachers droning on about all of the homework we were going to get that night – homework I would never do, EVER. The only thing that mattered was getting the heck out of school and getting to the business of youthful insanity, and that couldn’t happen fast enough.

You can actually buy this clock - click to see!

So watching my niece and nephews as my trip to San Antonio and then over to Fort Myers to pick up the Mustang approached, the days crawled. I’m not watching the clock per se, and it’s not the teachers droning I hear – but I do have a boss (actually multiple bosses) and some coworkers who provide a consistent low hum rather than that ear ripping drone, thank God – but it’s a drone nonetheless.

None of that matters in the scheme of things, though. It’s taken my whole life to learn about what really matters. I am reminded of it on a daily basis.

At the party, as I was telling my family about what I planned to do with Uncle Pete’s Mustang, I started to wonder if the connection would continue? I mean, I was around Ryan’s age when I started realizing who my Uncle Pete really was – Ranger Fan, War Veteran, Mailman…. I had questions, and my Dad always answered them – and if Uncle Pete was around, he most certainly would answer them, too. Now that I am an Uncle I wonder if my Neice and Nephews like to have me around as I did my Uncles. They have gotten to know me – I am Uncle Denny, the Uncle with the long hair (sometimes), the 3 cats, the red Mustang, the Yankees tickets, Ranger Fan, etc.

The nephews are Michael – the oldest, and who was ironically born on the same day as My Uncles Mustang was just over three decades before; Ryan, Michael’s younger brother. He’s the middle son of my middle sister and he – is – a – goof – ball. He’ll be a comedian for sure; Christopher, my Godson, and the youngest brother of Michael and Ryan and the youngest one that calls me Uncle. It would never surprise me if he turns out to be the toughest of the three boys. . Then there is Katie, second in age to Michael, and she is my baby sister’s daughter. If I had to predict who would follow the path of restoring their Uncle Denny’s 96 Mustang GT Convertible in 20 years, it would not be any of the boys – it would be Katie. I’ll try to keep it in good condition for her just in case :-).

I love all of the kids very much and I often brag about them to friends and acquaintances. I know Uncle Pete felt the same way about my cousins and I. I can only hope that at least one of them feels about me the way I felt about Uncle Pete and the rest of my Uncles and Aunts. 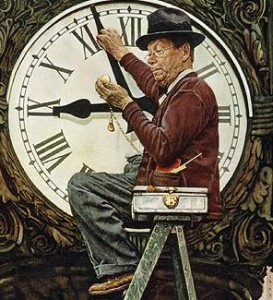 How do I measure the pride I have for these kids? My cup overfloweth. My heart fills with pride and joy as I watch them, sometimes with complete amazement. It’s at those times that I want to slow the clock down. I have come to realize how valuable my time with them and my family is. As I watch the next generation enjoy their youth, working hard on chaotic play, I realize that the red second hand standing still, even just for a moment, wouldn’t be so bad. These days when time is flying by lickety-split, its astonishing – even unnerving. I’ll take the slow days with family and friends – those are the days when, yep, time is on my side.