Part of me wishes that were true. Just sit and watch the wheels go round and round. The wheels of cars as they whirl by while I am sitting on my front porch sipping coffee; the wheels of airplanes taking off and landing on the tarmac as I wait to board my flight to tropical climates – but none of these, while nice all of them, can affect me more than seeing the wheels of my Uncle’s Mustang speeding down a New Jersey highway under the power of it’s newly rebuilt 289 2v Ford power plant. I dreamt the other night that was exactly what was going on – except in my dream, the Mustang was a convertible – not the classic Luxury Coupe that it is in life. The color, Tahoe Turquoise, gleaming fresh out of the paint booth. All a dream – but one that I will achieve soon.

I know, it’s been a while since I’ve written on this blog. A long while – but during my “blog hiatus” I was still working on the car, making progress. We all know that I was afraid of my own proclivity for slacking off from the work (best case) or just plain neglecting the project (worst case), and while I did slack off with the blog, I am happy to say that I didn’t slack off with the work on the car. It’s slowed down because I was limited by the lack of tools, knowledge, cash, and a car lift. Between that and not being able to afford the luxury of renting my friend Gary’s garage, it was time for a change of venue. 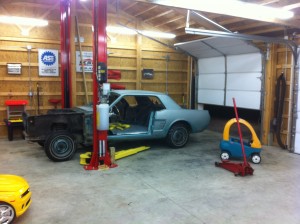 In its new temporary home!

I started to work on my own garage – cleaning it out, relocating stuff to other parts of the house. Time was running out on me and the car, and once again, it all fell into place. Months before, I had met my friend Bobby. Bobby and I, I found out through sheer coincidence, had a mutual friend, Leo Barnaby. Leo, a prolific race car designer, engineer, and driver, was killed in a 2008 car accident, and in some hard-to-believe chain of events, Bobby and I met a couple of years after Leo’s death. Bobby, a gifted A-plus mechanic himself, built a garage (my dream garage, for sure). During the planning phase to get the Mustang here and not long after I committed to bringing the car to Gary’s, he offered to let me work on the car at his garage. He’s also be very generous as time has gone on with tools, advice, moral support, and now, his garage.

The change of atmosphere is good for me, Bobby says it’s good for him, and I know it’s good for the car. More room, and Bobby and I are getting a lot done together. And that’s good, because we don’t have forever in this garage.

So Bobby’s garage is, frankly, the shit. The dream garage of any auto enthusiast, mechanic, or tinkerer alike. Pictures don’t do it justice. It is better than some of the shops I’ve worked in. It’s large, clean, and equipped with state of the art equipment and he has generously offered up space in his garage to do some of the fabrication and metal work on the car – as well as engine disassembly. While he has freely offered it up, this kind of generosity comes with some rules – not from Bobby – but set up by me to keep from taking advantage. What my father and some of the principles of Uncle Pete’s Golf Etiquette has taught me demand that I not only keep from looking this gift horse in the mouth, but I also reciprocate my friend’s generosity. If not for him, I would still be paying a lot of money per month to store the car. Money that (if I had it) would be better spent on the car itself. He know’s I am grateful, and we’ve talked about and established some goals and boundaries. I basically have 2 months – now a month and a half, to do as much work on it as I can. I may have more – but that is entirely at Bobby’s discretion.

What We’ve Done Over the Last Couple of Weeks

Well – you can check it out on the Picasa Progress Picture album for specifics. We are moving along fast, and the only thing that will stop me is financials. If you want to help, buy Toner and Ink from my company, Green Peak Imaging Solutions, LOL!!

Coming up next – metal work!