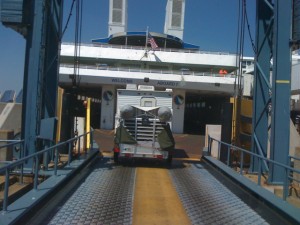 I was quite relieved when I made the ferry – and a bit amazed once again how it all was working out. Not once before the night before my last travel day did I even consider the Cape May-Lewes Ferry, and yet here I was driving onto the boat. As I drove on board, I felt a strong sense of satisfaction that soon I was going to be back in New Jersey with the Mustang – and a comedic irony that I was driving the car onto a boat. I wondered if Uncle Pete took the ferry when he drove the Mustang down to Florida from my Aunt Frances’ house in northern Jersey. 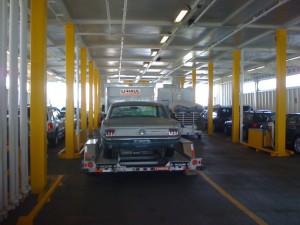 Safe in the Belly of the Boat

I started thinking about him as I pulled further into the belly of the boat. As I followed the instruction of the attendant on the Ferry, I wondered if Uncle Pete would be happy that I was bringing the car to my parent’s house for my Father, his baby brother, to see. The instructor guided me to within a foot of the car in front of me. I shut the engine down, and got out and walked to the back of the car. The Mustang was the last in line, and another attendant put a wheel chuck behind the trailer wheel to keep it from sliding back I guess.

People started to exit their cars and a number of them came over to the Mustang. The guy who scanned my ticket asked me if it was a 64 1/2. I told him it was a ’66 and he told me that he had a ’65 – I think he said it was a fastback. Then a gentleman named Ray from New Jersey came up. He complimented how good the condition of the car was.

I told him the story – My Uncle Pete was the original owner and the car has been sitting in his garage in Florida for more than a decade. I mentioned that he took good care of it with the help of his son.

“You know,” I added, “I think he’d really love all of the reaction this car has gotten from people during this trip.”

I showed him the interior and we walked around the back of the car.

He then added that he had a doctor in Philadelphia that had a 64 1/2 convertible (pretty rare car!). It was gorgeous I would think, and I was shocked when he told me that they traded it in early in the ’90s for a Mercury Grand Marquis. Wow. If only they’d known.

He snapped a picture of the Mustang and I with his cell phone – my first pic with the car outside of Florida! I didn’t want to leave the car behind, but I did want to go upstairs. Before I did, I snapped one more pic from a distance: 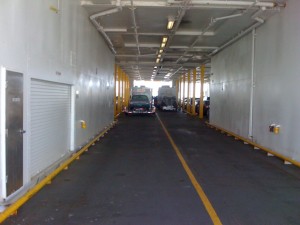 DEEP in the Belly of the Boat LOL

I made my way up onto the deck, and relaxed. We were moving at a good clip, and then someone announced over the loudspeaker that there were dolphins playing along side the boat. I ran to take a picture – and I saw them, but they dove down before I could snap a pic. You’ll just have to believe me. I have never seen a dolphin in New Jersey waters before. This was collectively a trip of firsts – first time driving by myself from Florida, first time hauling a car, first time seeing my young cousins kids, first time on the CMLF…. On and on and on. 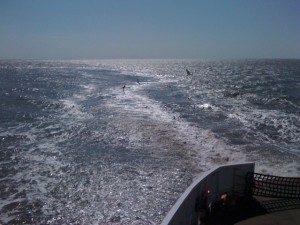 The ride was nice. It was peaceful. I sat towards the front of the boat first and then made my way to the back of the boat to watch the last few days disappear beyond the horizon. I realized that as I looked back, how very special this trip had been and I was only a few short hours away from it ending.

I couldn’t help but think about how I loved this trip. I felt myself smiling as I thought about the reunion with my cousins – Lea and her daughters Emily and Mary, Nicky and her sons Nicholas and Nathan, Phil, his wife, his son Phillip Cosmo, and his newborn son, Peter – not to mention Doug and Mary.

The way it’s all worked out till now could be luck, but I believe I am blessed. There I was on a boat, just a few minutes away from being back on New Jersey soil and only an hour or so away from my Pop’s house. I couldn’t predict what my parents’ reaction was going to be when they saw the car, but I was going to find out soon…. 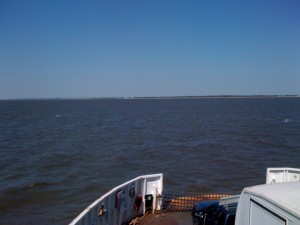