Thank GOD today’s flight was uneventful – even on time. To say that Monday’s flight to San Antonio for my business conference SUCKED COMPLETELY would be a total understatement. But today was good. It was relaxing.

So my golf clubs arrived at my cousin’s house unharmed early in the evening yesterday. The plan keeps falling into place – I could golf all the way home if I want. Me? I arrived to my cousin’s house early in the evening today. Doug picked me up at the airport. It was great to see him and talk to him. We were so busy talking about “stuff” that we missed a turn off and had to wing his Toyota Pickup around to right ourselves. I forgot that u-turns are not only legal in Florida, but necessary!

We got to the house, and I was immediately brought back to the late nineties – the last time I was here with my future wife, actually! I remember, Aunt Lotte and Uncle Pete both giving me their resounding approval of her – and implored me to get married. It took another 6-or-so years to get down to that, but I did – finally!

So I walked into the house ahead of Doug Sr, and called out “Hey Cuz!” and out walked my cousin Mary. She hasn’t changed at all – she still has that beaming smile that is only Mary’s. After hugs and some catch-up, we walked into the garage, and there it was – My Uncle’s Mustang – the center piece of all that matters this very moment. My thoughts spun out of control as my minds eye recalled my Uncle, my Aunt, my cousins, all his family that I don’t see nearly enough. With cleared thoughts, I had a look and my hopes were confirmed – the car is in great shape. 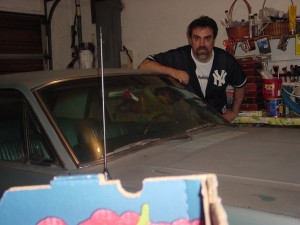 I took this myself

On the ride over, I asked for some more detail about what had been done to the car, and Doug told me that it was my cousin Phil, Uncle Pete’s son, who had done all of the work on the car over the years. He  filled me in on some of what Phil had done before Uncle Pete passed away. Engine work, body work, interior work – he did it all and kept the car running and respectable. Phil is and always has been a huge-hearted man and as Doug told me what Phil did to keep his Dad’s car on the road and in such good shape, I wasn’t surprised.

I started to feel some guilt about what I was doing. Taking the car from the garage it’s sat in ostensibly since my Uncle passed away is a disruption to what has likely become a familiar setting. I thought that maybe keeping the car in the family might be of comfort, albeit cold comfort; that bringing it to a luster long since faded will heal any wound; that the very thought of the Mustang restored will invoke reflection about his Dad like it has for me.

I am doing this for all of us. For my Dad, for Phil, Doug Jr., Mary, Doug Sr, and all of the grandchildren and great-grandchildren. I am doing it for Aunt Lotte (who’s car it really was initially) and I am doing it for Uncle Pete. My heart and my emotion tell me that what I am doing is right – like it needs to be done. I don’t know why, but I am here today, touching the car for the first time in over a decade and it all feels right. Today I am here and I am just going to keep putting one foot in front of the other with the hopes that what I am doing is right.