My Uncle’s Mustang breathes. Yesterday, Doug Sr. emailed me and let me know that the “Mustang is cleaned out and all stuff is off of it!”  I immediately emailed him back and asked him to send pics if possible.

We had been concerned that the tires sitting flat for years would not hold air we started talking about cheapo tires to put on the car just to get it on the trailer for the trip up to Jersey. It was reasonable to think that we would have to do this and Doug even WD40’d the wheel studs to ensure they wouldn’t be too difficult to remove. Today, however, another thing just “fell into place.” Doug emailed me “Great news…..ALL 4 tires inflated and appear to be holding air at least so far.”

The tire news was not the news of the day, though. Doug sent pictures!

I opened the email and the first picture was of a dusty old engine but it nearly brought tears of joy to my eyes when I saw it: 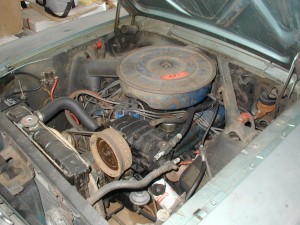 Dusty but beautiful! Click to see a larger picture!

I knew Uncle Pete took care of this car. The engine is dusty, but look closely – newer fuel pump next to the newer oil filter, new master cylinder which could also mean new brakes, radiator hoses, tune up parts (cap and wires) along with replaced shocks. Some of this stuff was probably done right before he passed away 12 years ago unless Aunt Lotte had it done afterwards. I wouldn’t be surprised if the air conditioning ran cold too – That air compressor for the air conditioner looks newer too – at least the clutch is.

The next pics were:

Look at the INTERIOR!!! The TIRES!!! They are holding air! Be sure to click on each one to see them in greater detail!

I couldn’t contain myself. I had to show the pics to a few people and I was at work, and the closest person in proximity was the Director of Sales so was the first one I showed. I felt sorry for him – he was about to get on the phone and didn’t look too pleased that I was summoning him to my desk, but even the deadpan-even-keeled Director of Sales was impressed with the condition. I showed the Chief of Technology, and he was way impressed – and clearly understood the magnitude of what he was looking at.

Then I emailed the pics to my Dad but as of a few minutes ago when I called to see if he’d got them, he hadn’t looked at them. I think he’ll get a kick out of them – the sheepskin cover on the drivers seat, the pony embossing on the “pony edition seats” and the luxury wood accents…. Yeah, he will.

My wife was very eager to see the pics and when she did tonight even she was able to comprehend the great condition the car was in, and based on my reaction, she told me she was excited for me.

Truth be told, I am not sure if anyone will ever be as excited about this as I am – about how everything so far is just falling right into place – from the car still being in Florida right down to the tires holding air. I am feeling a great deal of joy right now – a child-like excitement that has become all too unfamiliar, and it feels good – it feels right. Just one week till I am sitting in the car. I can’t wait to show it off, brag about it, about my Uncle, about everything.