Irony abound today. Doug Jr. called me and gave his blessing to me to get my Uncle’s Mustang and bring it up to New Jersey to restore it. So it is completely official now. I will be bringing the Mustang up here sometime before early May – and I’ve also found a garage to rent to do the restoration!

My friend Gary has a two car garage that he is going to rent me for the time it takes to do the restoration! The only thing that remains now is getting the vehicles to move the Mustang up north from Florida. I am completely elated, but I must also recognize the fact that on the day that the loose ends became a bit tighter, the man responsible for designing the iconic automobile, Donald N. Frey, passed away at 86 on March 5th. Godspeed – and thank you.

So during the email exchanges with Doug Sr., I asked him for some more current pictures and the VIN number of the car – and he did one better. He sent me a picture of the Data Plate!

This data plate provides valuable information about my Uncle’s Mustang that will help guide in the restoration. Engine type, interior spec, transmission type, color code (important!) etc. Doug Sr. also referred me to a fantastic website – Scott Martin’s 1966 Mustang Convertible.  This website has a great deal of information about the 1966 Mustang in general, and had a tool that “decoded” the information on the data plate. Here is what the decoder and the website told me about the Mustang:

This information is valuable to me because I can start setting some wheels in motion regarding the restoration – and certainly knowing the correct year of the car is a great start!!

Now I am certain, much more to come!!

On Friday, I got a call from Doug Jr.! I returned his call and left him a message on his voicemail, and then Saturday morning, I got a call from Doug Sr. Doug Sr. let me know that Doug Jr. was ok with the idea (on the surface I think) but told me to start making plans to get the Mustang and bring it up! THIS IS EXCITING – but I still need to speak to Doug Jr. and get his thoughts on the subject.

So now, I have to start planning the pickup and the resto! Let the fun begin!!!

No word yet from my cousins on what they want to do with the car – but Doug Sr. sent me some pictures of the car from 2002!! Check them out:

As you can see, the car is in really good shape! I mean, Mustangs are notorious for being ratty after 35 years: 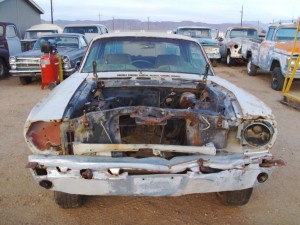 Thanks Uncle Pete (and Mary and Doug) for taking such good care of the car and keeping it in the garage! More pics to come!

Today I spoke to my cousin Mary and her husband Doug. First – it was great to speak to them. I can’t remember the last time I did – and it was nice to just talk and catch up on a few things. My Aunt Lottie passed away a few years back and the house was left to Mary and Doug. They live there now, and the Mustang still sits in the garage in the same place that it was perhaps since Aunt Lottie passed. The car belongs to Doug Jr. who lives up in Rhode Island. He has intended to bring it up there and restore it himself, but for the last 12 or so years, it has been sitting in the dry garage in Cape Coral, FL. To my delight, Doug and Mary described its current condition a bit – it doesn’t run, the tires are completely flat, and it’s currently used as a “work bench” in the garage…. I am smiling as I type all of this because it warms my heart to know that it is exactly where it should be – in the hands of the family.  I am trying to get pictures from them 🙂

So I put the proposal out there – that is, let me come down there and pick up the Mustang and bring it up to New Jersey so I can restore it here.

I could barely contain my excitement when she and Doug seemed more than open – actually quite willing – to let me do this. There is one tenet that I mentioned – I am adamant about doing this and then returning the finished car to either them or Doug Jr. It was always Uncle Pete’s hope and intent to leave the car to Doug, and that is where it should go in the end.

I pray for this to be a journey. I may know what to expect as far as the physical resto of the Mustang is concerned – and I have no illusions of getting any spiritual or emotional revelations from this project – but I have three main hopes – that this project will remove me from the mucky swill that I mentioned in my previous post, that I can see the project through to the end, and that I will grow from the experience.

So – where it stands now is that either Mary or Doug Jr. will call me within a fortnight, and when they do, I will post what happens. You might ask what happens if Doug Jr. wants to do this himself or if he just says no? I asked the same question, and we’ll cross that bridge when it comes. Let’s just hope that he says yes. 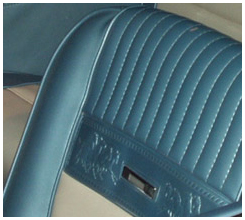 There are many influential people in my life – Family, friends, musicians, authors, poets. The greatest influence is my father, Danny – his values, beliefs, sports teams, his creative lust, etc. – I follow my Dad in nearly every respect. My Dad will tell you I take after his brother, Pete. That could be why I feel an affinity toward my Uncle and consider him an influence, also. I didn’t know Uncle Pete well like other influences, but he remains, even 11 years after his death, one of the most influential people in my life.

So I got the idea for this blog not too long ago. I have been sitting in a creative swill for as long as I can remember now, looking to being creative in work and with my house among other things to pull myself out of the muck. Work? Well – I had hope there, but that didn’t do it. Big surprise, huh? The house? I love my house. I have owned it alone and with my wife for almost 13 years now. I have remodeled it, and enjoyed doing it for the most part – but it wasn’t until after I bought a plastic scale model of a ’66 Mustang Fastback that I thought of something that really grabbed me.

My interest in Mustangs began with my Uncle Pete’s sky blue Pony Edition model and continued with my Uncle Jimmy’s from what I can remember of his. When my sister Christy bought a beautiful white convertible GT in 1994, I had to have one myself – and I did by 1996. A red convertible GT – a car I love, and one that I still proudly own.

So I often asked my Dad, “what ever happened to Uncle Pete’s Mustang?” He never really knew and didn’t want to ask for some reason. My cousin Mary’s son and Uncle Pete’s Grandson, Doug (Dougie when he was like 5) inherited the car. So did Doug restore it? It was in rough shape the last time I saw it – interior rips, a buckled fender, some rust I think. Not to mention the unknowns like the shock towers, the floor boards – all of the usual Mustang aging glitches. Did he actually take it? Did they sell it?

So back to the scale model – I was thinking, “ok, I need to find out what happened to Uncle Pete’s Mustang.”

I don’t care much for Facebook  – but my cousin Mary (Pete’s daughter) and I are “friends” on Facebook, and I wrote her to ask what happened to the Mustang. I was afraid of the answer, but guess what?

The Mustang is still in Florida. So I am now hoping to find out if she and her son Doug (and Doug Sr. for that matter) will help me with my new “project”…..